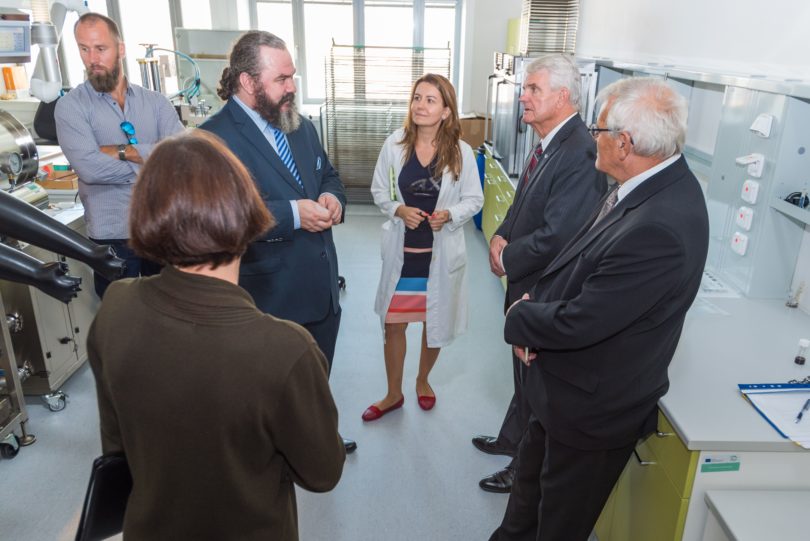 Tomas Bata University in Zlín hosted on the 5th of September 2018 Mr. Stephen B. King, the United States Ambassador to the Czech Republic. Accompanied by Prof. Petr Sáha, TBU Rector, he took a tour of the Centre of Polymer Systems research unit.

Stephen King has been in the office of the U.S. Ambassador to the CR since autumn 2017. He used to run business in chemical industry – he built and later sold a chemical manufacturing business; it thus comes as no surprise that he was interested in visiting the Centre of Polymer Systems due to this experience.

“I am really, really impressed, specially because the university is so young, only 17 years. I am particularly impressed with the research and the development, that is going on at the university. Czech history would tell us that Czechs are famous for the golden hands, but the future of the world is in high technology, I think. And that is exactly what this university is trying to do. Bring Czech enterprenership, bring Czech creativity, bring Czech industriesness to the global economy,” said Mr.Stephen B.King.

During his visit to the Centre, he had the opportunity to talk to some of the researchers. Current cooperation among TBU and American institutions was also discussed.

In connection with the upcoming 100th anniversary of establishment of Czechoslovakia, Stephen B. King also talked about the close relation that has been cultivated between the two countries since 1918.